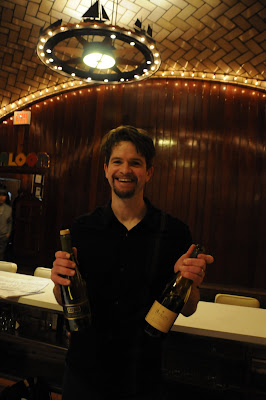 Fancy walking into the swank Grand Central Oyster Bar in New York City, expecting to drop some bills on martinis and oysters but instead finding a sign advertising a free wine tasting. The wines of Byron Winery were splayed across the bar. Winemaker Jonathan Nagy was there in the flesh, pouring a 2007 Pinot Noir and a 2007 Chardonnay. Beside him was a self-described silver-tongued sales serpent, but for all of his pitching, he came off more as a friendly Dr. Gonzo Lawyer than as a scaly salesman.

Once we'd finished off our tastes, Jon and the Gonzo Lawyer said that the tasting was over but that several wine bottles were still not empty. Another round was poured. Gonzo Lawyer said to my friend Lenny, "You're a nice guy," and poured his glass to the brim with Pinot. I stuck to the Chardonnay and discussed grape yields with Jon. He said that he believed that grape yields shouldn't be calculated by acre, but by vine, because growing vines in balance with one another is the more authentic way to ensure balanced wines. Think about it: You have two vines growing next to each other, but one garners the majority of the sunlight and the other is mostly in the shade. This is not good. The characteristics of the fruit will greatly differ and so it will be harder to create balanced wines with them. Jon went on to explain that he's begun planting vines even closer together, 3 to 4 as he said, which means 3 vines in 4 feet. The norm is 3 to 5. 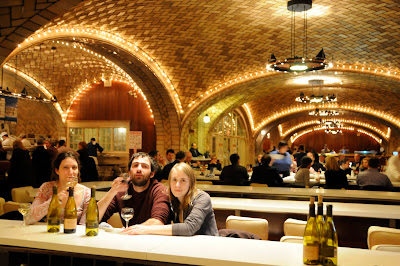 Jon is certainly creating great wines, and the Chardonnay was unique and expressive. It was nicely oaked, cut through with a crisp acidity that made it an instant favorite among my fellow companions.

It seemed that the Winemaker and the Gonzo Lawyer were truly enjoying their time in NYC, even though the weather in Santa Maria, where Byron Winery is located, certainly beat the mind-numbing wind outside of Grand Central Station. They left us with the rest of the opened wines: two half-full bottles of Chardonnay and one mostly full bottle of Pinot Noir. Not a bad way to begin our travels! Who says you can't get things for free in Manhattan?
Email Post
Mattie John Bamman
After more than a decade as a travel writer and restaurant critic, I moved to Maine with my wife to start a homestead. I created Ravenous Farmer to inspire others to live more sustainable and fulfilling lives.