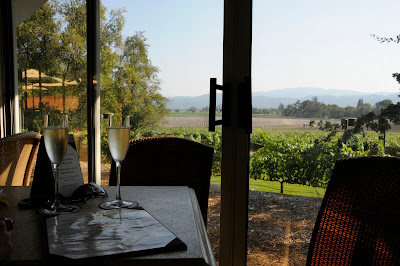 I hadn’t been paying very close attention to the country of origin for most of the Prosecco I’ve been drinking. In fact, I usually order it rather carelessly at the beginning of a meal without even looking at the producer because I assume that it is Italian made. I mean, it says Prosecco doesn't it? But it turns out that 60% of Prosecco comes from regions outside of the traditional Conegliano-Valdobbiadene growing region and Italian winemakers are getting ticked. To counteract the bastardization of Prosecco, Italian winemakers are calling for a Prosecco designation similar to Champagne’s.

One of the most vulgar displays of Prosecco by a foreign producer is the Austrian-based Rich Prosecco, which features a naked, gold-painted Paris Hilton on a can (yes, a damn can! how irreverent!) which can be purchased for three bucks. Fortunately, a recent New York Times article helped to expose the plight of Prosecco.

If the designation does go through - and the keyword is “if,” for legislation in the EU goes very slowly - wine will only be able to tout the name Prosecco on its label if it does indeed come from designated regions in northern Italy. Unfortunately, this designation will likely lead to soaring prices for Prosecco. And another a very delicious alternative to Champagne could fly out the window... Oh well, there is always Cava, Cap Classique, Sekt, Asti, Brachetto, sparkling Shiraz, and Pezsgo to hold us over.
Email Post
Mattie John Bamman
After more than a decade as a travel writer and restaurant critic, I moved to Maine with my wife to start a homestead. I created Ravenous Farmer to inspire others to live more sustainable and fulfilling lives.