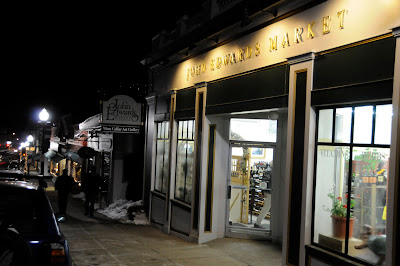 John Edwards Market in downtown Ellsworth holds a wine tasting the first Friday of every month during the winter, providing not only a delicious selection of wines to keep us warm but an impressive display of brie, shrimp, chicken satay, fried porcini wantons, and vegetarian sushi (this is only what I remember of the evening of course). The tasting is located beneath the store itself, in an expansive room filled with works by local artists. I arrived at five, making sure to beat the incredibly long lines, which did in fact wrap around the room at one point. 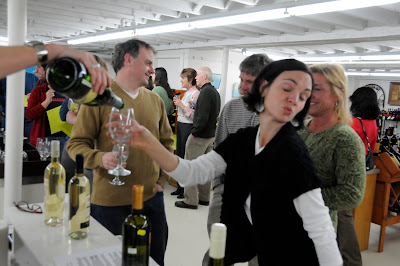 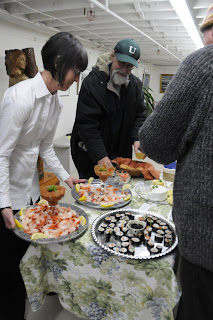 My first pour was a very nice 2007 Domaine St. Peyre Picoul de Pinet, poured by a very nice wine distributor named Jack (unfortunately I lost the last name, which really is a shame because he was really a great guy and when he heard about my Italian plans demanded my name and email so that he could get in touch with a winemaker or two who he knew in the Puglia region so that I might learn a thing or two from them while sweating away as a volunteer) who explained that the tasting was focuses around terroir. Terroir is a French concept without English translation, and it is what Karen MacNeil called connectedness: the ability of a wine to taste like the area in which it was grown. I asked Jack how one tasted terroir without knowing the unique components of the soils from the many winegrowing regions in the world. He gave a fair answer to a question that simply could have been answered: You need experience. He listed the various mineral qualities that wines can have, such as minerality, earthiness, and barnyardiness. 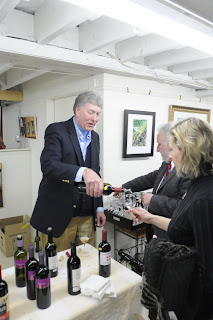 The night involved ten wines - four whites, five reds, and one cava - and I found my favorites were not necessarily the most expensive (always nice). The above mentioned Domaine St. Peyre was $10, a great southern Rhone 2005 Chateau de Calce Cotes du Roussillon was $11, a earthy Silcian 2007 Fondo Antico I Versi Rosso was $11, and an impressively old world 2005 Spann Vineyards Merlot that used grapes from Napa Vally and Sonoma Vally was on the high end side, $22, but had serious aging potential.

Well, thank you Mr. Edwards, you have made another chilly and dull Friday in Maine into anything but ordinary. 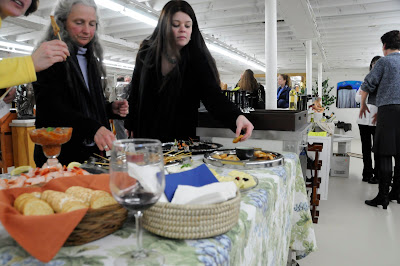