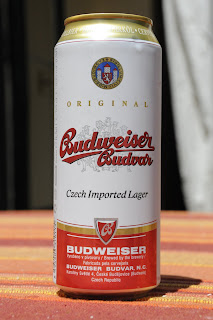 Late last night our friend Kabir arrived from Czech. Republic. My bud lives in Boston and just graduated from MIT, so he's using the downtime to see new parts of the globe. We woke up first thing this morning to take in an Italian mass, then we hit the road to the beach. It was a beautiful day for biking and that Adriatic Sea was a perfect blue. During the evening ride back, we took a detour and found somebody's impressive herb garden growing among some of the stone ruins that dot the countryside. Basil, rosemary, thyme, chili peppers, and chives were caught in the shadows of the dilapidated stonework. And now we're back, and Kabir has surprised Kristin and me with a few gifts from the north. 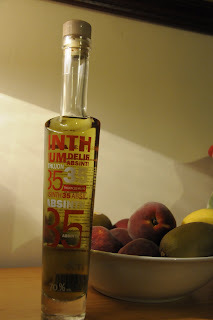 First, Bundner Fleischspezialitaten, or, like, something that looks like prosciutto. We're going to serve his Fleish-thing alongside Taleggio Cademartori, an Italian brie-like cheese. Then Kristin's making Pesto alla Genovese (over homemade linguine) in true mortar and pestle style, followed by my arancini, or risotto balls stuffed with mozzarella. Our friend also pulled out Czechvar, which most people know as the original Budweiser. Finally, he whipped out Absinthe 35, the real deal, and man am I excited to try it in like... well, a couple minutes.

Before I go away and enjoy this stuff, I'm going to say that there's a lot of hearsay about absinth, particularly about the mystical wormwood and the quality of the stuff sold in America. This hokum actually bores me to death and others have dealt with it better, so I'm just going to tell our story. My friend went into a respectable spirits shop in Prague that specializes in absinthe and asked for "the best." The guy gave him Absinthe 35. To drink it, the store owner said mix 4 parts water to 1 part absinthe. He said to take a sugar cube on a spoon and pour the water over it and then discard the sugar cube. He also said not to drink too much because it makes you go blind.

Absinthe 35 declares that it has Thuyon in it, and defines thuyon as "euphoria." I don't know how you bottle euphoria without being metaphorical, but this stuff is 35mg/kg, hence the inclusion of 35 in the name (I imagine). According to the store owner, you shouldn't drink so much that the alcohol drowns out the thuyon. So, here we go. I'll be back in a few (10:11pm, Sunday). 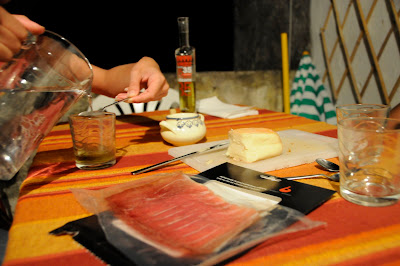 Well, 12 hours later (10:46am, Monday) and I'll say that Absinthe 35 provided me with the best absinthe experience I've had. First, it tastes smoother than many absinthes, which sometimes taste too herbal for me, almost like chewing licorice bark or something. But Absinthe 35 was menthally, and actually went well with the Fleischspezialitaten, which had a great taste slightly darker than prosciutto, and cheese. It was a palate cleanser in that it tasted like I just brushed my teeth after every sip. I recommend drinking it with salty foods if you want to pair it with anything.

Its effects were more of a high than a drunk. It was heady and we all agreed that we were thinking way more about what we were thinking than we'd ever think while drinking regular alcohol. It made us feel slow, like we were behind. Our speech turned into audible drivel, and summoning the energy to open our mouths properly seemed almost boring. I, personally, had the experience of getting completely uninterested in what I was saying about half way through each sentence and regularly failed to complete my thoughts.

For those wishing for a hallucinogenic experience, sorry to tell ya that's not what we found. Thuyon is a great high that is nothing like being drunk, but we didn't see anything like elves or tracers. But if you do--that's fine. And don't hesitate to write about it in the comments section! Cheers!
Email Post
Mattie John Bamman
After more than a decade as a travel writer and restaurant critic, I moved to Maine with my wife to start a homestead. I created Ravenous Farmer to inspire others to live more sustainable and fulfilling lives.