Gazpacho, Apollonio, and the Meaning of Kindness 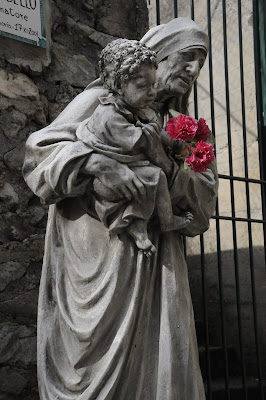 Right before a thunderstorm struck, Kristin and I sat down to a light afternoon refresher of homemade gazpacho and Apollonio's Unfiltered rosato, 2007 "Diciotto Fanali" 100% Negroamaro. I had to chop the veggies by hand (no blender available) for the gazpacho and the zen of the activity--the enduring repetition--made me think of how kind Italy has been to Kristin and I.

It began three years ago when we visited the tiny town of Atrani on the Amalfi Coast. We met everyone in every business in the tiny main piazza within the first hour of being there, and several of the business owners made gifts of their products and gave us a delicious lunch. Of course we have gone back since, and again the feeling of community and kindness pervaded. Since Kristin and I speak Italian on a basic level, the people we meet share their kindness without even really knowing us. We respond with elemental phrases of appreciation and two of the widest smiles you've ever seen. 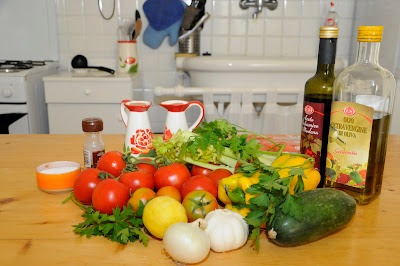 The Apollonio rosato was itself a gift from winemaker Massimiliano Apollonio, who is widely regard as one of the top 5 winemakers south of Rome. We had scheduled a tasting the day before yesterday and afterwards he offered us the bottle to take home. We were on bikes and had 5 kilometers to ride but that would never stop us from taking home one of the most interesting rosati we've tasted. I imagine Massi enjoyed the image of us touting his wine away on the windy road between his vineyards. 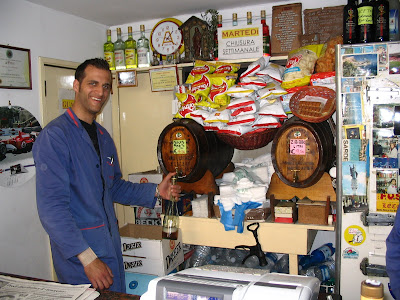 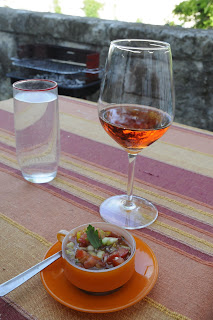 Before I talk about the traditional "Diciotto Fanali," I will tell one more story. Down the road is our wine guy who we met three years ago and who has always sent us packing with good wine. We trust his opinion. We had recently broken a series of wine glasses and needed to purchase new ones and asked him to recommend a good store. Instead, he took us into his storage room and pulled out a few cases of glasses, asked us which we liked, then gave them to us. We couldn't pay for the glasses (he wouldn't let us) so we bought a bottle of Candido "Immensum." When we drank the rosato yesterday using the new glasses, let's just say we had a lot to cheers.

Massimiliano Apollonio creates so many wines that my head spins. He loves to experiment. He studied oenology and worked under winemakers in France and Spain before coming back to his home and working on his family's winery. His story is long and I hope to interview him for i-Italy Magazine, so I'll keep you posted. His "Diciotto Fanali" rosato is made in a traditional method I'd never seen before, in which the skins of the grapes are kept in with the wine until it is bottled, resulting in a rosato that is not rose in color, but an orangy fuschia. It is an incredibly unique, and, from my perspective, untraditional rose. It exhibits the Salento terroir well because it tastes like summer. Really. It reminds me of fields of dry grasses. I resisted saying this for some reason, but it seems right. It was nice to see Alfonso Cevola thinking similar things. 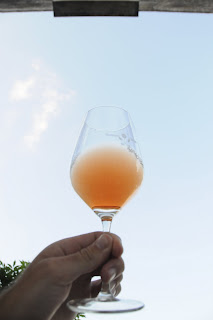 It has a nose of roses, embers, and honey suckle. It has a wealth of individual flavors that combine to create much more than their individual qualities but which include honey, a light toast, apricot, and the illusion of the sweetnesses of pear, apple, and raisins. It is not as acidic as many Puglia rosati. Definitely not a light bodied rosato. The best part is that the wine's intensity tapers off and then returns for a large, viscous finale.

The kindesses we've been experiencing as of late have made me want to return the kindness. For me, I think it's important to return the kindness to people who I do not know well, but who I feel have a positive energy. Being kind to friends is only natural, but to extend that kindness to people we know less, that's something beyond normalcy, that's killer. Hope you're having a good day.
Email Post
Mattie John Bamman
After more than a decade as a travel writer and restaurant critic, I moved to Maine with my wife to start a homestead. I created Ravenous Farmer to inspire others to live more sustainable and fulfilling lives.