The Best of the Best Wines from Puglia 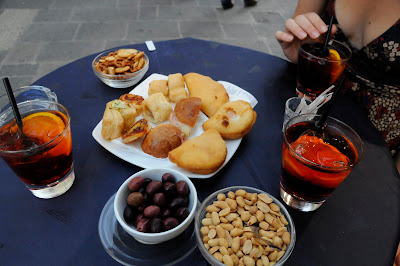 Kristin and I are firm believers in Italy’s Aperitivo, a long happy hour that includes traditional snacks of all kinds, and we have been drinking more wines than I’ve had time to report. After long days of writing, we sit down to tarallini, a light, olive oil infused cracker that looks like a miniature bagel, olives, salami, etc. and a new bottle of the best Puglia has to offer. So here’s the best of the best Puglia wines. I believe that you can find most of these in the United States. They should run between $9-20 dollars. If you have any specific questions don’t hesitate to write a comment or send me an email.

An extremely expressive wine, I tasted so many interesting flavors, from blackberry to tobacco, that I didn't mind that it was mildly sweet. The sweetness adds to the size, the grandiose character of Salice Salentino wines, making the Apollonio a forerunner in the DOC.

This wine is so good that I've drank it twice in the last week. It is not overly extracted and has little fruit. As the wild pepper photographed beside it reveals, it has a nice pepperiness that stands out. The foremost quality is cedar, giving the wine an old but friendly quality that prompted K to call it a "dad wine," meaning a wine that you would buy for your father and that would almost certainly meet his approval. Right now it is vying with Cantele's 2006 Teresa Manara 100% Negroamaro for the best red wine Negroamaro to display Puglia's terroir.

Cantele's wines are slightly more reserved than some Puglia wines. The are, in general, less fruity. The Salice Salentino is not the most expressive around, but it is reliable and perfectly balanced. Dark fruit, smoke, dried cherry, and a killer price makes it a steal. Here's what Wine Spectator wrote.

This wine is at the top of Cantele's line and combines the two grapes Puglia is known for, resulting in a medium-bodied wine and expressive flavor. It is very dark, begins with choke cherry, moves into anice and chocolate, then rounds out with soft spice. It is great with food and should be allowed to breathe for 45mins-1 hours.

This is Italy's oldest rose and, in my opinion, the best wine to exhibit Puglia's terroir. It has a complex structure that most roses simply cannot achieve. Think of something like a cross between a Pinot Noir and a Sauvignon Blanc. Great for red wine drinkers looking to chill out. It has strong acidity that makes it perfect for food pairing. Its bouquet is almost indescribable with some smoke and tulips. It tastes creamy at first, then some lime, a cutting acidity, and ends with tiny tannins. The finish is powerful and long and another example of why it is called The King of Roses.

Bortrugno Winery - (alright, probably can't find this one in the U.S.)

Ottavianello is the same grape as the French Cinsault, and Bortrugno's is atypical of most of Puglia's wines. Before sipping, it has a bouquet of violets. It has complex tannins that are so soft that they keep the wine from being particularly dry or giving that intense fuzzy-feeling of some bone-dry Chianti. This is the closest thing to Petite Sirah that I've found in Puglia.
Email Post
Mattie John Bamman
After more than a decade as a travel writer and restaurant critic, I moved to Maine with my wife to start a homestead. I created Ravenous Farmer to inspire others to live more sustainable and fulfilling lives.