Copertino: The City And The Wine 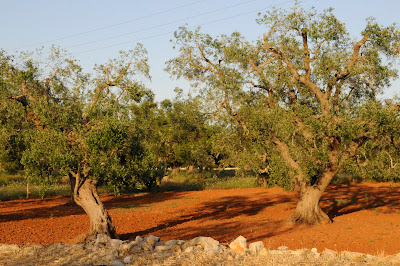 I just returned from an evening bike ride to Copertino, which is both a city in Puglia and a DOC that focuses on the Negroamaro grape. Riding along the old roads of the Italian south has gripped me, partially because of the crops growing alongside, from grapes, to chicory, to olive trees, etc., partially because I want to explore, but mostly because of the people I meet. And tonight I got more than I bargained for. 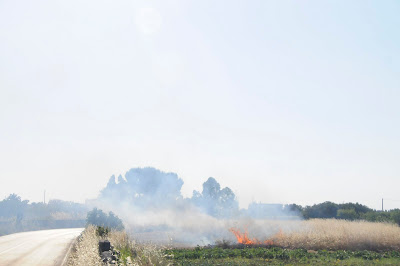 Above is proof that you never know what you'll find.

Downtown Copertino, 12km from Lecce, is medium-sized for the south of Italy and home to Marulli Winery and Cantina Sociale Cooperativa Di Copertino. On the outskirts of the town, but within the DOC, are Apollonio Winery, Azienda Vinicola Mocavero, and Azienda Agricola Giovanni Petrelli, to name a few. The first time I came here I was traveling by car and arrived at the ghost-town hour of 3pm, when everyone's either inside eating or alseep. Amazingly, my friends and I met a man who got his buddies at a salumeria to open up and make us sandwiches. 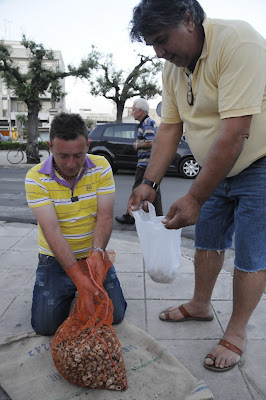 This time my girlfriend and I arrived around 7pm, when everyone's sitting around in the piazza (not a free seat anywhere) drinking beers and watching the sun go down. For the most part, it's old Italian men. I found my new friends piling snails onto a scale and asked if I could take the picture. They were happy to oblige and when I told them I was visiting from California, "Joe" (on the right) reminded me that there's a Cupertino in SoCal.

My girlfriend and I needed to ride back before nightfall, but they wouldn't let us leave without sharing a drink of wine so we went into the nearest bar. It was a festive mood and everyone wanted to be in a picture. The part was that when I showed them the pictures on the screen, several kinda shrugged like Is that all.

Alright, I lied. The best part was the moscato that Joe bought for us, the kind man he is, and then showed us how to drink Italian-style. I'd always found it interesting. When you go to an Italian bar, which serve both coffee and alcohol, you usually stand at the counter, and I'd witnesses people ordering beers or glasses of wine, slugging them back in one or two gulps, then leaving. And so it was. Joe had almost nothing left after the cheers, and Kristin and I followed suit, though we had quite a bike ride ahead. 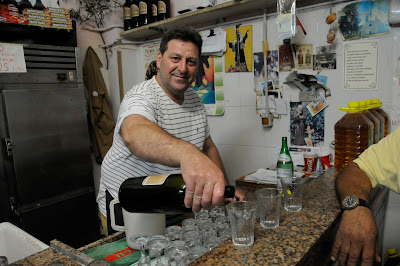 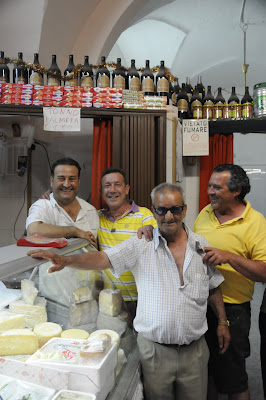 The people in Copertino made our night wonderful and for that I thank them. Multiple more offers for drinks were presented, but we had to get biking. If it weren't a matter of basic safety there would have been no prying me away. I'll be heading back to Copertino soon, to meet up with the guys and report on the wines.
Email Post
Mattie John Bamman
After more than a decade as a travel writer and restaurant critic, I moved to Maine with my wife to start a homestead. I created Ravenous Farmer to inspire others to live more sustainable and fulfilling lives.