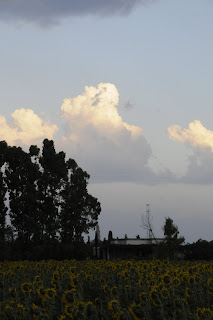 Yesterday I visited Cantele's winery in Guagnano (part of the Salice Salentino DOC) in preparation for an upcoming interview with Paolo Cantele for i-Italy Magazine. Umberto Cantele, the man who oversees Cantele's blooming commercial success, gave a full tour to show off his impressive state-of-the-art, carefully cared-for production facility, complete with gravity-propelled transit and underground aging rooms. The Cantele family, whose history in the region begins in the 1950s, constructed these facilities in 2003, and their production has since grown along with their wine ratings.

The weather in southern Italy has been extreme this week, from erratic thunderstorms to hail and floods. The title of this post is the name of an album by Wayne "The Train" Hancock that seems to sum it up. Kristin and I decided to dare the weather anyway and bicycle the 25km from Cantele back to Lecce. We took a train there (bicycle transportation is provided free on all regional trains in Puglia). It has been a week of extremely expressive and beautiful skies, the damp smell of heat and rain, and thunder so loud it sets off car alarms. All of this is wonderful for the grapes. 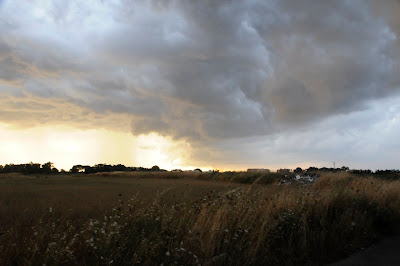 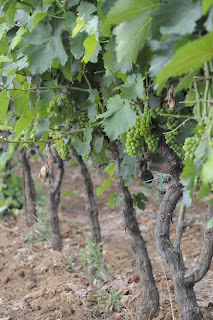 Umberto Cantele is an individual who likes to engage life through minute particulars. I asked him what the differences and similarities are between Primitivo and Zinfandel and he began by pointing out that there are three different Primitivos even within Puglia: Primitivo di Manduria, Primitivo di Gioia, and Primitivo of Salento. The first two are DOCs, the last is an IGT. Umberto's goal is to exhibit the typicity, the characteristics unique to an individual vineyard, of Cantele's Primitivo. Through their wines, he wants to express the land, the year, and the food of the region.

For example, Cantele also produces a Fiano, a white grape usually associated with Campania—in particular, the wine called Lacryma Christi. Cantele is unique in its cultivation of white grape varieties in a red-dominated region. Umberto thinks that the Salento region is perfect for the Fiano grape and my tastebuds agree; it is a supremely balanced wine. Umberto loves the variety for its elegance, but also because it goes extremely well with gamberoni crudi, or raw shrimp, a specialty of nearby Gallipoli. This can be seen as the beginning of an explanation of the differences between Campania and Puglia Fiano wines.

It made me realize that when you taste an particular Italian region's wine you are, to some extent, also tasting its food. It also made me realize, that as a young person, I know nothing. Maybe after forty years I'll know something. Probably by age fifty-five, but maybe not. Some people live their entire lives without learning anything. Socrates, for one. 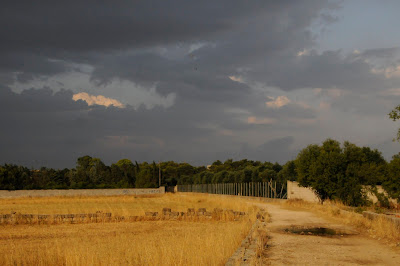 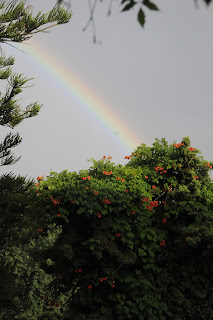 Umberto knows the soil of the land that he grew up on. He knows how the vegetables taste that grow from that soil and he knows how they should be prepared. Even better, he knows the grapes that grow from the soil, how they are prepared, and how they should taste. Kristn and I got caught in a rain storm on the ride home at around 15km. It caught us by surprise and soon we were laughing at ourselves and kissing on the side of the road. Cars honked and we ran for shelter beneath a few trees. Life teaches you as you go; the important thing is to know how to roll with the punches.

For Umberto, this rain, so late in the season, signifies a potentially incredible year.
Email Post
Mattie John Bamman
After more than a decade as a travel writer and restaurant critic, I moved to Maine with my wife to start a homestead. I created Ravenous Farmer to inspire others to live more sustainable and fulfilling lives.